How do I get my paintball marker license in Victoria

We are often asked if people can buy their own paintball gun in Victoria.
If you are looking to play more competition paintball in Melbourne you will ultimately need to get your Category P license. Prior to 1996 you could buy a paintball marker (gun) using a category A or A/B license. 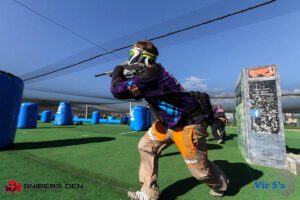 From 1996 onward the legislation surrounding the legality of paintball in Victoria changed and this included the rules for obtaining a paintball marker. Part of the justification for the change was the negative effect caused by paintball markers being included on the same categories as many rifles and shotguns. The issue arose when people began to apply for a gun license because they wanted to buy a paintball gun. The concern was that once they acquired a paintball marker they had the appropriate license that could be used to purchase firearms that they had no legitimate need for.

It was also observed that the the safety course required to obtain a category A/B license would not address the differences related to the nature of paintballing. The obvious component of that is that with a “real” firearm being a rifle or shotgun, the golden rule is to never ever point it at anyone. A great rule, but not as relevant when it comes to paintball. In fact it is the actual point of paintball…

As a result in 1996, the licenses separated and a new firearm license category was created. The Category P license allowed people to own paintball markers without the complications that arise from a category A/B license. A safety course, unique to paintballing was created. The paintball safety course was more suited to the realities of the sport. Snipers Den are now running safety courses to help facilitate people getting into the sport of paintball in Melbourne more regularly. Keep in mind that to play paintball in Victoria you do not need to be licensed. Even to train and compete you don’t need to get a paintball license. Ultimately when you do play competition paintball however you will eventually want to buy a paintball marker of your own and that is where the license kicks in.

If you want to own a paintball marker in Victoria you need to get your paintball marker license. The application can be downloaded from the Victoria Police Website. http://www.police.vic.gov.au/content.asp?Document_ID=34324 To support the application you will also need to have 2 supporting pieces. You will need to have proof of the safety course as well as a genuine reason for holding the license.

Safety Course
As far as the safety course goes, Snipers Den Paintball Melbourne is well equipped to help with. Currently we are running the courses every couple of weeks and you can give us a call to express your interest. The Paintball safety course goes for about 1 – 1.5 hrs and we generally cater for 2-8 people at a time. The safety course involves a video, a discussion on the safety of paintball and a multiple choice test at the end. At Snipers Den Paintball Melbourne we also include a run down on compressed air safety, paintball gas bottles including refilling and velocity checking (chronographing) of paintball markers. We will also discuss factors such as the storage and transportation requirements.

Genuine Reason for holding a Paintball Marker License
There are 2 easy ways to justify your paintball marker license. One is a letter of support from a paintball field. While this one is technically accepted it is not preferred as it is too open ended. The preferred option is to be a member of a Club as this has an expiry date and needs to be renewed. Very important – If you are a member of a paintball club, it is your responsibility to maintain the membership. If your membership lapses, this forms grounds to have your license cancelled.

Snipers Den Paintball Melbourne is expecting to have a club up and running by late September and in the interim, we can provide a letter to confirm that you are an active player. We will convert this to be a membership once we are established.

If you are interested in getting into paintball in Victoria please contact Snipers Den Paintball Melbourne on 0395683969 to find out when the next safety course will be.