We have finalised the details of the new Paintball League that we are launching from September.

Our main goal with the league is to have a regular training and competition to allow new players to enter the sport. We also want to make sure that existing players get something out of the competition and are exposed to the newer players that are entering the sport. We aim to link the event to a full day of drills and scrims to help further develop teams and players. Here is what we have in mind… 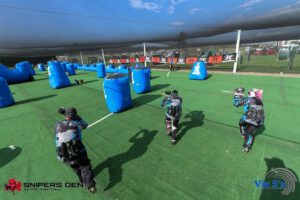 As most people now know, we at Snipers Den Paintball Melbourne have worked very hard to build what we think is the best tournament paintball field in Australia. We have now decided to open it up to competition players for the full day as part of the new league.

This means that the full day, all players participating will not need to stop playing for the birthday party and bucks party style bookings. This is a first for Snipers Den Paintball and a reinforcement of our commitment to tournament paintball in Victoria.

Prior to the paintball league itself we will be maximising the access to the field to make sure that paintball teams and players are training with the best drills and exercises led by the best paintball players in Victoria and where possible Australia. We are also hoping to include some international players where possible to grow the experience of players competing in Melbourne. The drills and scrims will be going from 9am and throughout the day. The Melbourne Paintball League itself will start from 3pm and continue for an hour or 2.

The idea of the Melbourne Paintball League is to start a different type of competition in Victoria.
There will be 2 teams at the start and if the idea grows we will expand it. We hope that the teams that support it will split their existing players between teams. We want this to be a separate type of competition to the team based ones. This will go a long way to allow new players to find a place in teams as they develop.

To begin with we will split the existing pool of tournament players which will form a base for us to direct new players coming into the sport. We will establish Captains which will help foster the new recruits and run the the team. You don’t need to attend every event but when you do you will play for the same league side each time.

For the league we will play 10 points, one day per month. Single point rather than race or mercy and teams will rotate players through to make sure that all players play an even number of points. The idea here is to make sure that newer players have an equal game time to the better, more experienced paintball players.

New players will be drafted to one of the teams depending on the players in the current roster. We will be providing jerseys free to borrow for players although players can wear existing jerseys to assist with sponsorship clashes if needed.

We have small prizes that we are looking at from a number of businesses to make it interesting but it will be far from sheep stations. The cost will be included in the standard field fee and paint will be charged at the normal field price.

The refereeing will be looked after by Jill Henty of Refs inc and will be supplemented by Snipers Den Paintball Melbourne staff as well. People who don’t wish to play can also volunteer to help referee if they would like to help. We will talk about the team side of things in more details but wanted to go over the broader strokes first.

We will be running the Melbourne Paintball League on the first Sunday of the month starting September. We are planning on starting one week late to avoid Fathers Day. So we are looking at (for the rest of 2016) the following.

We are hoping to launch a separate website for the event – coming soon….
Please fbook or email any thoughts. If you want to read about the thought process that led us to this model click here Building Paintball Melbourne