Paintball to move to 16 in Victoria!

Celebration as paintball prepares to lower the min age to 16

This week there was a major movement in the age limit legislation relating to paintball in Victoria. We have seen an amendment added to the Justice Legislation Bill 2015 – proposing the age for paintball ion Victoria will drop from 18 to 16.

As the Bill had already passed the lower house the time frame for implementation will be significantly reduced. From here the bill needs to be approved again in the lower house and then formally announced.

The lower house sits again from 9/6/2015 and we would expect the lower house to stamp it during that week. The time from there to the bill going live is unknown and generally happens with very little warning. We are hoping that at some stage in June we will run the first session of 16year olds.

If you are interested in being among the first 16 year olds to play paintball in Victoria email admin@snipersden.com.au and we will contact you as soon as we know the first date we can run games for people under the age of 18.

This age drop is the first reduction in the age of paintball participants since the industry was established decades ago. We are extremely excited about the movement in the minimum age for paintball and look forward to opening up the world of paintball to many more people!

Sadly not a great piece of news relating to to the legislation looking to lower the age of paintball in Victoria.

We were officially notified today that the Justice Legislation Amendment (Firearms and other matters) Bill 2014 has officially lapsed. This means that it will not proceed in its present form.

Hon Wade Noonan MP has stated that he will continue to work with stakeholders in relation to firearms matters. Prior to the election he confirmed support for the lowering of the age limit and hopefully this is reflected in future bills as they are introduced.

What this means –
1. There is likely to be a significant delay to any change to the age limit as this now requires completely fresh legislation to be introduced.

2. We will continue to engage with Hon Wade Noonan MP in conjunction with PAVs, other organisations and individuals to assist in the development of legislation that will benefit the industry.

I will of course update you all on any fresh changes as they occur.

The future of Tournament paintball in Victoria…. Part 1

Victorian paintball has gone through a number of changes in the last 20 or so years. It all started with pump action paintball markers out in the bush and we are now at the point where we are playing on the same layouts as teams on the other side of the world with paintball markers capable of 20+ paintballs per second.

For the last 5 years however the rules and formats of paintball have consolidated leading to a period of stability in the sport from a competition point of view. Sadly during this period the amount of people competing in paintball tournaments in a regular basis in Vic has dropped significantly.

It peaked in around 2012 when 28 teams participated in PAVs – now called Vic 5s hosted by Snipers Den Paintball Melbourne. Last round of Vic 5s we had 12 teams total. And this was the equal max for the season. So it is evident that there are issues recruiting new players, holding onto existing players or perhaps a little of both. After chatting to players, field owners and other event organisers and a few trends seem to keep coming up. 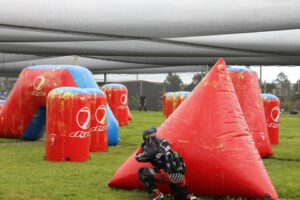 The legal age for paintball in Victoria is 18 and over. Obviously most sports do not have an age restriction and this forms a big part of how they recruit players. When look at organisations such as Auskick for AFL football it is evident that this has a big part in recruiting players to the sport and fostering long term retention of the players.

The legislation is looking like it will change the paintball age limit to 16+ in early 2015. Hopefully this will help but we will still be chasing our tails unless it lowers a little further. Assuming the age limit lowers it will also depend on how the legislation is enforced from the perspective of paintball licenses. The best guess currently is that people under the age of 18 will not be able to hold a paintball license. This is only based on the implementation of other firearm categories and hopefully is a little more lenient than that but we will need to see how it occurs.

Once we do have under 18’s around the sport players will need to make adjustments also. As a sport that has been restricted to 18+ for a long long time it may require adjustments to the culture and appropriate language. If paintball in Melbourne to be taken seriously as a sport we need to represent ourselves as such. Younger players are going to bring parents and families and this influx of paintball players could easily dry up if we scare off the new source of paintball competitors.

Conclusion: Lowering of the age limit will be a great boost to tournament paintball but we need to be careful to represent our sport professionally when this happens. 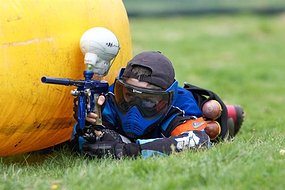 In the USA there is no official minimum age for paintball

Update to the Paintball Age limit Change in Victoria

Unfortunately it is official…. The reduction in the legal age for paintball will not go through before the election in November. This has lead to some concern that a potential change of government in Victoria could easily derail the bill. As a result Snipers Den in partnership with the Paintball Association of Victoria contacted the Victorian opposition leader Daniel Andrews for comment on the bill…